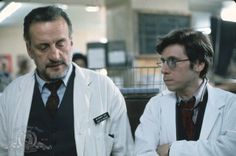 “I SAID, ‘EVERYBODY LIVES WITH LIES’!” showed a pivotal scene from Arthur Hiller’s black comedy The Hospital (1971, written by Paddy Chayefsky). It starred George C. Scott in the role of Dr. Herbert Bock, the Chief of Internal Medicine at a large, prestigious teaching hospital in Manhattan.

You’ll recall that Bock is a man in crisis. He’s started hitting the bottle as his stormy marriage finally breaks down for good. His kids hate him. His beloved hospital is falling apart before his very eyes. Callous incompetence surrounds him. He’s in despair.

The early scene from The Hospital shown here opens just as the supervisors have finally untangled the identity of the young corpse found in the bed assigned to a recently admitted elderly patient named Guernsey. During the night somebody must have secretly moved old Mr. Guernsey to another bed.

The question here arises whether one of the junior doctors, a Dr. Schaeffer (nicknamed “Sammy Stud”) moved old Guernsey in order to use his bed for a brief but passionate rendezvous with his latest girlfriend, one of the hospital’s lab technicians.

At one point during the night, while “Sammy Stud” lay unconscious (but why was he unconscious?), two nurses followed protocol by plugging a 5% glucose solution into his arm, thinking he was old Mr. Guernsey. The sign on the bed said GUERNSEY, after all.

Unfortunately, Dr. Schaeffer was a diabetic, so 5% glucose was fatal. This is the first in a series of macabre – and fatal – incidents involving patients and the hospital staff. All further proof to Dr. Bock that the hospital he loves is rapidly going to the dogs.

(If the actress playing the chief nurse – Mrs. Christie – looks familiar, it’s because she played the lead character’s mother in the TV series The Sopranos.)

One thought on ““THE WRONG POOR SON OF A BITCH””