Everyone knows that Shakespeare line: “Now is the winter of our discontent…”

It’s from one of his earliest plays, The Tragedy of King Richard III, about the bloody rise and fall of the English king from the House of York in the late 1400’s. It remained a popular staple on the English stage well into the 1630’s, some 20 years after Shakespeare’s death and more than 40 years after its first performance. For audiences back then Richard III was like The Godfather is for us.

The main character was – and continues to be – portrayed as a misshapen, limping creature. In the opening scene Richard describes himself as “rudely stamp’d” and “curtail’d of…fair proportion”. He’s “deform’d, unfinish’d.” Driving  home the point, he adds, “[I was] sent before my time into this breathing world scarce half made up”. And, he admits, dogs bark at him as he limps by them.

One Richard III treading the board…

The play begins with England enjoying a time of peace and stability under its new king, Richard’s  brother Edward (another “son of York”). But “these fair well-spoken days” bring Richard little joy. He has “no delight to pass away the time”, he declares, “Unless to spy my shadow in the sun, And descant [pass comment] on mine own deformity”.

Needless to say, women shun Richard. The delights of love are off-limits to him. So, since he “cannot prove a lover”, he decides to become a ruthless villain. He’ll be “subtle, false and treacherous”, lay plots, set traps and merrily lie and murder his way to the top. He predicts that even though he was “cheated of feature by dissembling Nature”, he’ll have the last laugh. The throne of England will be his.

He plans to start by double-crossing his brother George, the Duke of Clarence.

A YouTube search reveals a host of actors – the famous and the unknown – and their video interpretations of this speech (usually entitled Now is the winter of our discontent or Richard III: Act 1 Scene 1). Some renditions are inspired. Some are dreadful. But whatever talent they may bring to the table, and no matter how well they deliver these lines, there’s an inherent problem with this speech.

With all its references to deformity and weakness, disfigurement and lameness, a healthy actor with a robust physique playing Richard III immediately challenges our suspension of disbelief. It’s not as big a challenge as the black Norwegians in Kenneth Branagh’s film version of Hamlet, but it’s big enough to set the eye and the brain in opposition. 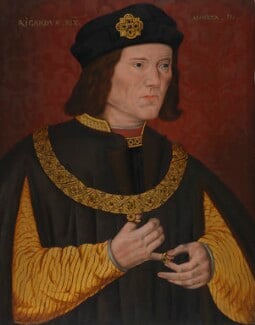 Ironically, the real King Richard III of England (posthumously nicknamed Richard Crookback) was nowhere near as physically challenged as he’s been depicted through the centuries. They discovered his corpse some years ago, and the forensic analysis showed that even though he suffered from roundworms for much of his life he was not in especially bad health by medieval standards. The idiopathic spinal scoliosis which developed in his teens did cause one shoulder to be higher than the other. But this didn’t unduly hamper his mobility, and the royal tailor could easily pad one shoulder to hide the slight imbalance.

By the time Richard died in battle aged 33 there were probably people who’d known him for many years without suspecting he had lopsided shoulders.

In Daniel Pelissier‘s 3-and-a-half-minute video below we are given a tightly controlled rendition. There’s none of the ranting and writhing, sneering and snarling that we must endure in so many less well thought-out performances. Pelissier judiciously delivers the soliloquy while seated, leaving the physical infirmities to our imagination. He skillfully brings out the wry wit woven into the lines, something most actors either undervalue or fail to notice in the first place.

Compared to most other Now is the winter of our discontents out there, this sophisticated interpretation is a little gem, and I commend it to your attention.

3 thoughts on “TO PROVE A VILLAIN”